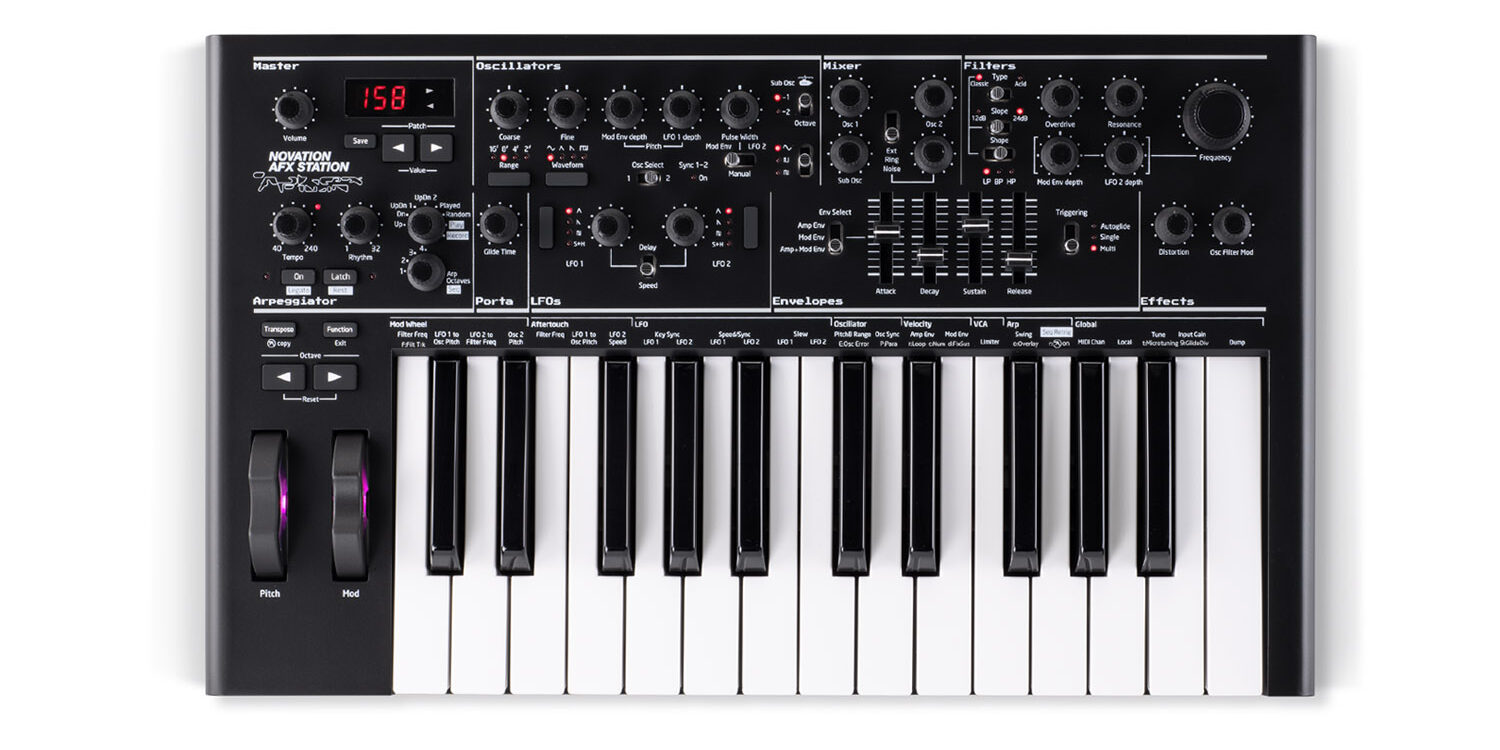 Designed in collaboration with electronic music legend Richard D James aka Aphex Twin, AFX Station is an all-new limited edition of the Novation Bass Station II. A sound designer’s dream, AFX Station has the same powerful feature set as Bass Station II, with the addition of AFX Mode pre-installed, which revolutionises the way the monosynth can be played and programmed. Perfect for sequencing and arpeggiation, every key on the instrument can become a new patch, making it a powerful analogue drum module, a flexible sound design tool, or a killer bass or lead machine. With striking purple reveals, the famous ‘A’ insignia, and custom giftbox designed by long-time Aphex Twin collaborator Weirdcore, it’s also an instant collector’s item.

We’re extremely proud of this exciting collaboration, not only because of the sound design capabilities it brings to music makers, but because of the associated brand kudos of working with one of the most widely respected electronic music makers on the planet. Aphex Twin is somewhat reclusive and keeps a tight grip on his brand, so the fact that he chose Novation to co-design a product with gives us a feeling of immense pleasure. Novation products, like Aphex Twin’s music, have always been forward-thinking and ahead of their time, and we think this collaboration gives a nod to our future-forward outlook, and to staying a few steps ahead of the curve.

The results of our collaboration with Aphex Twin goes further than the highly desirable AFX Station synthesizer. This campaign will be a conversation starter within the synth community and beyond; the campaign will reach a wide audience across the entire music business, and draw mass attention to Novation and our numerous product ranges. In addition, the added attention will draw even greater evaluation of Bass Station II, from which AFX Station is closely derived, and which can be updated with the AFX Mode firmware, providing the same technical functionality as AFX Station.

Envelopes can be set to a fixed length, so the decay stage is taken out of play, and the decay slider instead sets the duration of the sustain stage. The number of times the envelopes retrigger can be adjusted, to bring more control for drum synthesis.

The sub-oscillator follows the pitch of oscillator 1, and can be detuned using the coarse and fine controls, so the sub can be tuned to any non-octave-tracking interval you like, for subtle or dramatic creative effect.

Oscillator Glide Diverge allows the glide time of oscillator 2 to be slowed down relative to oscillator 1 by a variable amount, causing the two to diverge for interesting portamento effects, for adding thickness and character to basslines, pads and leads.

The frequency triggered by each key press can be completely controlled, giving scales another dimension.

The pitches of each of the two oscillators can be controlled separately in its single-voice architecture. Two notes can be played at a time rather than just one, and users can get interesting interactions through the Ring and Filter Mod.